Valley of the urRu

Evil does not exist. [...] Evil is disharmony between existences.

During the late Age of Division, urZah assisted his master urSu in raising the Gelfling Jen, whose clan had been destroyed during the Garthim War. Above all, he taught the young orphan the value of listening.[1]

After the death of urSu, urZah took charge of his funerary rites. He bestowed a blessing on Jen before sending him on his way to Aughra's observatory by breaking three ritual vases containing earth, water and air, commanding Jen to be one with each. Despite Jen's protestations, urZah refused to divulge further information on the nature of his mission, cryptically intoning that the young Gelfling needed to approach his quest with questions rather than answers.[1]

After finding out that Jen had come across the Shard of the Division, urZah joined his comrades in following urIm over a series of days to the Castle of the Crystal, where he eventually merged with his Skeksis other, skekZok, during the third Great Conjunction.[2]

A hundred trine later, upon being split again through the actions of Thurma, urZah forbade the urRu from helping the Gelflings against the Skeksis, asserting that the urRu's purpose was reflection, not intervention.[3]

Like the other urRu, urZah spoke primarily in riddles, though he was relatively more talkative. Contrary to his comrades, urZah's thought spirals encompassed his entire body rather than just his face, as a result of deep meditation.[4]

Because of his frequent meditation, he held a low opinion of music, in particular that produced by wind instruments, which he considered a distraction and believed it made "a slave of air".[1] A skilled sand painter, urZah used his art to compose prophecies and conduits of spiral energy through Master Time Spirals, combing and brushing the grains of amethyst, opal, agate, onyx, and chalcedony while his comrades chanted.[5]

In contrast to his comrades, urZah apparently did not fear the influence of Skeksis artifacts, as the points of the broken abiranariba on his Prayer Stick were not constrained.[5] 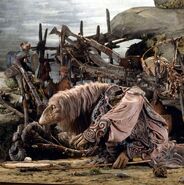