Valley of the urRu

SkekSil was perforated by crystal shards in Mithra, causing his death (TPOTDC)

Harmony is the sound that goodness makes.

UrSol was the urRu's chanter and counterpart to skekSil the chamberlain.

He had a wide vocal range, speaking in a gentle voice yet singing so resonantly that waterfalls stood still and all the stones in the Valley of the urRu shook.[2] He was also capable of singing a third row of harmony.[3] Aughra considered him to be impatient by urRu standards and a rogue.[4] When Jen was a child, urSol would sometimes sing along to the tunes the Gelfling played on his firca, but had to restrain himself in order to avoid his deep voice drowning out Jen's music.[3]

Although merged with his Skeksis other at the conclusion of Jen's quest, urSol was once again separated from skekSil during the Age of Power after Thurma shattered the Crystal.[5] He refused to stay neutral during the ensuing conflict between the returned Skeksis and the Gelfling, and secretly gifted Aughra with an enchanted tuning fork,[6] which summoned Bohrtog from the urSkeks homeworld to aid against the Skeksis.[4] He joined his comrades in the upper towers of the Castle of the Crystal[7] and summoned a premature Great Conjunction which shattered the Castle, separating the Skeksis from their intended victims.[8] UrSol subsequently died after his Skeksis other was killed by flying fragments of the Crystal, which had been destroyed after Thurma healed it.[9]

His spirit, alongside skekSil's, lived on in the Prism.[10] The two were encountered by Kensho, who felt burdened by his appointment as leader of the Gelfling Nation. UrSol countered skekSil's attempts to encourage Kensho's melancholy by reminding the Gelfling of Thurma's love for him.[11]

UrSol, after his hand was wounded when his Skeksis counterpart skekSil was stabbed by Jen. 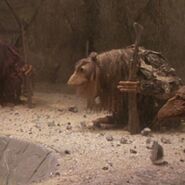 UrSol, gathering with the other Mystics before the crystal.

urSol with his Skeksis counterpart, skekSil the Chamberlain.

The Chamberlain and the Chanter die.

The Chamberlain and the Chanter in the Prism.