Edit
watch 02:07
Spider-Man: No Way Home Trailer Dropped - The Loop
Do you like this video?
Play Sound

Thra was a planet located in the Uni-Verse orbited by three suns and three moons. It was nourished by the Crystal, and was home to Aughra and numerous sentient races, including the Gelfling and Podlings.

Thra was orbited by the Three Brothers (the Rose Sun, the Dying Sun and the Great Sun) and the Three Sisters. From space, Thra appeared to be spherical,[1] though J. J. Llewellyn, in his annotated translation of the Book of Aughra, hypothesized that Thra may have actually been triangular in shape, in line with the indigenous inhabitants' patterns of thought. However, this did not explain the planet's lack of glaciated regions, which would have theoretically formed at the triangle's apexes, and it was largely unknown if Thra even rotated.[2] The Firelings visualized Thra as a flat disc.[3] It had a seasonal climate which included autumn,[4] winter,[4] and spring periods.[5]

The planet was kept alive by the Crystal of Truth, which nourished itself with the rays of the Three Brothers[1] and distributed their vitalizing energies throughout the planet via a network of Crystal veins.[6] This energy translated into essence, which gave life to the planet's inhabitants, and would be reclaimed upon their death to start the cycle anew and keep the world in balance.[7] Preventing the Crystal from nourishing itself, as the Skeksis did, would cause Thra to develop an infection known as the Darkening, which devastated plant life and briefly drove animals insane before killing them. Even when the Crystal was well nourished, blocking its refracted rays could still cause Darkening outbreaks.[8]

Thra was a sentient planet, able to communicate directly with supplicants through the Crystal[7] and indirectly through Aughra, an entity created by the planet to act as the guardian of the Crystal[1] and warden of Thra's inhabitants.[9]

Thra's surface world was dominated by a large landmass surrounded by the Silver Sea.[10] The landmass consisted mostly of the Skarith region, which sported a wide variety of environments, including desert, alpine, temperate and tropical. Little was known of regions outside of Skarith, though the Field of Fire was stated to have been volcanic in nature and largely uninhabitable to all but the strongest of creatures.[11] Beneath Thra was a vast network of underground caverns and tunnels, among which was the realm of Mithra.

Thra's indigenous life was highly variable, teaming with plant and animal life, though the boundary between the two in some species was remarkably fluid.[10] Such taxonomic ambiguities included Seedles, Thrushpogs and Vindles. As with all aspects of the planet, the bodies of Thra's creatures displayed a triadic symmetry.[12]

Thra was home to numerous sentient species of varying degrees of technological advancement. The Gelfling, native to Skarith, were the most widespread race and established numerous settlements throughout the known world,[13] including the port cities of Cera-Na and Ha'rar, and landlocked villages like Sami Thicket and Stone-in-the-Wood. They were the closest creatures to Thra, being particularly rich in essence,[1] and, while culturally diverse, were linked by common values such as respecting nature.[13] Throughout the later stages of their history, they developed a rivalry with the Arathim, a race of intelligent arthropods that the Gelfling had displaced from their homeland of Grot. By the late Age of Division, the Arathim lived in scattered bands throughout Thra, with some occupying the Endless Forest[14] and others eking out an existence in the intestinal tract of the Mondo Levidian.[15]

The Podlings were another prominent species on Skarith, who lived primarily in the Endless Forest[16] and Spriton Plains.[17] They were almost exclusively agriculturalists, with no set religious or political systems, and had a natural affinity with animals.[18] The Boblings, a subspecies of Podling, evolved within the Mondo Levidian and established a monarchical system of government.[19]

Thra's underground cave networks were originally home to the Makraks, a race of proud miners, though they were forced to relocate to the Field of Fire after an earthquake destroyed their subterranean domains.[11] Their former territories were later settled by the Firelings, descendants of Gelfling exiles, who established the realm of Mithra, which was ruled by a triumvirate of Ember Queens. Mirroring the hostility between Gelfling and Arathim, the Firelings developed an enmity with the Fragors, a race of sentient insects.[20]

The Gruenaks were once the most technologically advanced race on Thra, before being driven to extinction by the Skeksis.[21]

Thra was given life when the Uni-Verse sang it into existence, after the formation of the Three Brothers. According to the Covenants of Thra by Fellen the Elder, the new planet initially fell into chaos, with ceaseless warring between flora, fauna, water, land and sky. In response, Thra created Aughra to mediate between the combatants and assign each one its respective task and domain. Aughra then turned her attention to the young Gelfling race, teaching its members the nature of the Crystal of Truth underground, as well as how to survive and establish a culture and language.[9]

Some time later, a living meteorite collided on Thra and was reshaped by Aughra into Raunip, a creature of both Thra and the stars. This prompted Aughra to take a greater interest in the cosmos,[11] and erected the Standing Stones to chart the movements of the Three Brothers.[9] The Gelfling, meanwhile, colonized the Crystal Desert and began to forge the first weapons in response to Arduff attacks.[22]

A thousand trine after its formation, Thra was visited by the Fallen urSkeks, who arrived on Thra through the Crystal during the first Great Conjunction. For the next millennium, they assisted both Aughra and the Gelfling in their technological development, allowing the former to study the movements of astral bodies, and the latter to cross oceans and colonize much of the planet.[9]

During this time, the Gelfling made first contact with the Podlings in the Endless Forest,[16] and the Gruenaks created a technologically advanced civilization.[21] 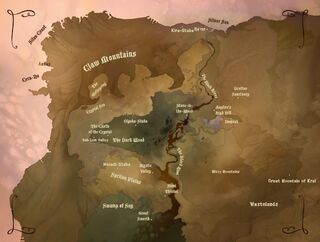 When the time came for the urSkeks to return home, the darker halves of their natures prevented them from entering the Crystal. Instead, they were split into two new races; the cruel Skeksis and gentle urRu.[23] The Skeksis took control of the Castle, while the urRu took refuge in the Valley of the Standing Stones. The Skeksis cracked the Crystal, chipping off a shard[23] and thus infecting the world with the Darkening.[24]

The Skeksis and the Gelflings formed the Alliance of the Crystal, though the aging Skeksis eventually began to capture Gelflings for their essence. When the Gelfling elders prophesised that one of their own would heal the Crystal and reverse the Division, the Skeksis initiated the Garthim War, aiming to exterminate them all. The species was ultimately cut down to a mere two individuals; Jen and Kira.

Jen's quest to restore the shard to the Crystal began after the death of his urRu master urSu, who instructed him to find Aughra before the Three Suns met again. Jen took the shard from Aughra, and encountered Kira. Together, they rendered the Crystal whole again, and the urSkeks departed to their homeworld, leaving Thra green and verdant again.[25]

Jen and Kira's rule as caretakers of the Crystal saw the re-emergence of the Gelfling, though their keeping of Skeksis artifacts and abuse of the Crystal maintained scattered pockets of the Darkening in some areas. Their accumulating of offerings to the Crystal prevented its light from nourishing Mithra's Mother Sun, causing the Great Dim which nearly resulted in the extinction of the Firelings.

When Jen and Kira finished their task as guardians of the Crystal and left with the urSkeks, the Crystal was left in the hands of the remaining Gelfling, with Kensho watching directly over it. Mithra and Thra were at peace with one another, continuing to grow and understand one another even with the threat of the Skeksis' corrupt influence.