The Crystal Calls is the penultimate episode of The Dark Crystal: Age of Resistance, season one. It was released on Netflix with the rest of the season on August 30, 2019.

Desperate to save one of their own, the Skeksis make a deal with Aughra. Rian and Deet continue their search for the Dual Glaive.

Deet awakens to find the Grottan and Arathim safe above ground. The Darkening averted, Rian is ready to re-enter the Caves for the Dual Glaive. But it’s actually closer than he thinks. Argot reveals her walking stick to be one half of the weapon in disguise. 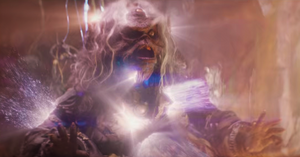 With the Hunter clinging to life, the Skeksis prepare to drain more essence. Lucky for them, they have three of the most vigorous and powerful Gelfling in their grasp: Seladon, Brea and Fara. The three are strapped in but Aughra enters before skekTek can flip the switch. She offers herself in place of the Gelfling, providing them with the essence of Thra itself to save the Hunter. SkekSo agrees to the deal out of fear of the afterlife, freeing all the Gelfling in their prison. But not without a contingency in the form of skekVar.

Tavra reveals the Gelfling/Arathim alliance to Brea and Seladon as they make their way through the catacombs. They’re soon met by skekVar and skekLach, with orders that no Gelfling leaves the castle alive. Tavra stabs skekVar as the Arathim arrive incapacitating skekLach allowing the other Gelfling to escape. SkekSil stabs Tavra in response, giving skekVar enough essence to heal his wound. Tavra’s sister find her and escape the castle with the rest of the Gelfling. Her wounds are too dire, though, and Tavra passes in the embrace of her sisters far from the castle. When Aughra is strapped in she tries to persuade skekTek to have a change of heart mentioning their past friendship, despite admitting that he wasn't proud to be responsible for Aughra's death; skekTek decided to end his friendship with Aughra when he realized that skekSo was listening to their conversation. Aughra's comments that all that awaits skekSo's future is "nothing but dust" doesn't stop the draining, killing her but failing to resurrect the Hunter. Meanwhile, Argot gives the Dual Glaive to Rian and directs him to find the other half in Stone-in-the-Wood, when it's revealed that Ordon was the original wielder of the sword, hiding it after battling the Arathim. At Stone-in-the-Wood, Brea and Seladon carried Tavra to a place where she could rest. Her health diminishing, Tavra mournfully says "the bonds of sisterhood will not be broken", shortly before succumbing to her wound and dying. Both Brea and Seladon mourned at their sister's death, reconciling with each other in the process. 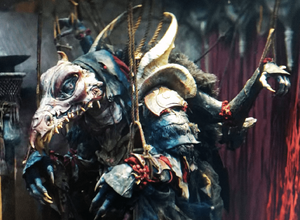 Back at the castle, skekSil pitches a new plan to the Emperor after the Skeksis are left without an army. They can build one by reanimating dead Arathim as soulless warriors. SkekSo agrees, commanding skekTek to build his army allowing the scientist to have access to all resources, he then grants skekSil his place at his side once again. SkekSo orders the Hunter’s body dressed in his armor and prepped to be hung in the throne room for all eternity.

Deet and Rian find Stone-in-the-Wood desolate. The only sign of life is the fire of the Crucible where Stonewood warriors deposit their weapons after battle. The other half of the Dual Glaive is hidden inside it. Rian retrieves it without burning himself and reforms the blade. The Dual Glaive restoration causes the forge’s flame to burn blue. All other flames within Thra follow suit, allowing Rian to speak to all Gelfling at once. The Skeksis are able to listen via the crystal. The Hunter’s body twitches as they rush to the crystal chamber.

Rian informs all Gelfling about the Skeksis crimes, and that the Lords of the Crystal have turned against them, against Thra. The time to rebel is upon them. He reveals he has the Dual Glaive, to the shock of the Skeksis. Rian calls for all Gelfling to assemble at Stone-in-the-Wood and stand as one against their oppressors. SkekSo warns them of fighting their rulers, but Rian stands unmoved. The communication window closes and skekSo tells the Skeksis to prepare to crush the Gelfling at dawn.

In order of appearance:

Retrieved from "https://darkcrystal.fandom.com/wiki/The_Crystal_Calls?oldid=17365"
Community content is available under CC-BY-SA unless otherwise noted.