Grassling
The Spriton Clan ("SPRY-ten")[1] was a Gelfling clan which resided in the Spriton Plains. Its members were characterized by their dark hair, calloused hands and sun-tanned skin.[2] Its patron tree was Nenadi-Staba, and its sigil animal was the Landstrider.

The Spriton were primarily farmers, and had a reputation for knowing soil as well as the Dousan knew death.[3] The Spriton's agricultural way of life made them prize generational knowledge more than other clans, and they regularly cohabited with Podlings, with whom they would share in their labor. They were renowned throughout Skarith for their magically imbued crafts.

According to the Gelfling creation myth, the Song of the Six Sisters, the Spriton's maternal ancestor had been entrusted by Thra during the Age of Innocence with the gift of the protective land and the foundation of the earth.[4]

The Spriton, under the leadership of Elder Carn, were the first clan to pledge themselves to the Alliance of the Crystal.[5] When the Darkening began harming their crops, the Spriton were forced to trade grains with the Stonewood Clan.[6]

The Spriton inhabited Spriton Plains, a hilly land south of the Endless Forest bordering the territories of the Stonewood Clan in the north and the Drenchen in the south.[9] Their capital was Sami Thicket, the heart of which was the Spriton Pavilion, a large stone hearth where the Spriton would congregate to work or celebrate special occasions.[10]

More than any other clan, the Spriton valued generational knowledge, depending on it to ensure the continuation of their agricultural livelihoods.[9] They further distinguished themselves by writing in a different alphabet from the other clans.[11]

When not tending to their crops, young Spriton would spend their time by refining their hunting and riding skills through bolas-throwing competitions and knock-knee.[9]

Spriton villages were notable for their openness to animal life, with Landstriders, Swoothu and Windsifters being common sights in Sami Thicket. The Spriton also freely cohabited with Podlings, dividing their workload with them and raising their childlings in shared nurseries.[12]

Although a medium-sized clan at best, almost a third of Spriton lived in the outskirts of the Spriton Plains, far from the Spriton Pavilion. Despite this, they never lost their sense of community with the rest of their clan.[13]

While pacifists, they occasionally had disputes with the neighbouring Stonewood Clan, though these rarely escalated beyond name calling.[2]

Members of this clan were hard workers, whose daily toils lasted from sunrise to nightfall. Spriton laborers were divided into three groups, the first being the hearth workers, which included caregivers, song tellers and various artisans such as weavers and stitchers. The second group consisted of dirt workers, who tended the land and animals, cultivated crops and kept oral records of seasonal wisdom. The last group was the path workers, responsible for trading their wares with other clans.[14]

The Spriton were skilled artisans with a gift for magic, which they incorporated into their crafts, ranging from textiles and quilts to agricultural implements and weapons. Most of their crafts were made from wood, fiber and animal sources, due to the scarcity of metal in their territory. Spriton textiles were easily recognized by their vivid colors and exposed stitching, deliberately left visible as a statement over how the Spriton viewed themselves as the "stitchers" of their race through their extensive trading. Spriton sandals were also highly sought after because of their durable wooden soles. As the straps were what held the sandal together, the Spriton left them exposed as a sign of respect. Spriton pottery also emphasized the respect they held for binding materials, allowing the plant material used to fortify the clay to emerge from the surface of the pot. Spriton lyres were unique among the Gelfling in having a seventh string, made from metal obtainable in Ha'rar.[15]

The Landstrider was the Spriton's sigil animal, embodying the traits of nobility, fearlessness and endurance. Tame Landstriders were fed fruit and nectar, and trained to wear saddles. The beasts were mostly kept in spacious valleys outside Sami Thicket, where their handlers would erect feeding troughs and dig trenches to collect drinking water.[16] Historically, Landstriders were not the only mounts the Spriton used, as they also rode large knuckle-walking reptiles during the early Age of Division.[5]

The Spriton placed great importance on the Sour Squash, as its appearance during the autumn heralded the beginning of winter and the harvesting season. During the Festival of the Sour Squash, the plants would be roasted on the Spriton Pavilion's hearth by scores of younglings. Traditionally, participants could not eat their own squashes, thus the younglings would distribute the cooked squashes among their clan-mates and Podlings in the hope of receiving the same in return.[17]

The Spriton celebrated their own variant of the Day of the Great Sun which they termed the Longest Day. To prepare for the occasion, the Spriton would prune the trees around Sami Thicket and remove the thatching on their roofs in a ceremony known as "sun-filling", thus allowing the Great Sun to fill the area and the houses with its light. When the Longest Day began, the Spriton would create a pyre out of their old items and later spread the ashes on their newly thatched roofs.[18]

The Spriton's centuries-long agricultural experience allowed them to perfect the art of selective breeding in their crops, as well as elongating growing seasons and raising non-native cultivars in their own territory. As such, the majority of their diet was dominated by fruits and vegetables, with meat only being taken seldomly from carefully chosen creatures that were swiftly slaughtered in a solemn ceremony. Spriton dishes frequently took the form of mixed salads flavored with tangy sauce or seasoned with nuts or toasted seeds. The clan was also renowned for its dairy products, in particular its cheeses, which fetched good prices outside of the Spriton Plains, including Ha'rar.[19]

Behind the scenes[edit | edit source]

The name "Spriton" was first used in concept art for Carn's village in the third volume of The Dark Crystal: Creation Myths, but was never stated in dialogue.[20]

In The Dark Crystal: Author Quest press release and J.M. Lee's young adult novel series, the Spriton are portrayed as a warlike clan which disputed with the Stonewood Clan over ownership of the Dark Wood. 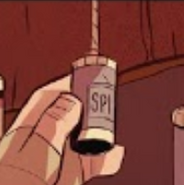 Example of the Spriton alphabet 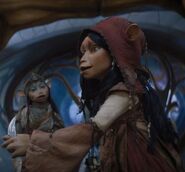 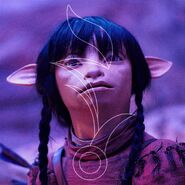 Kylan
Add a photo to this gallery

Retrieved from "https://darkcrystal.fandom.com/wiki/Spriton_Clan?oldid=24976"
Community content is available under CC-BY-SA unless otherwise noted.