Castle of the Crystal

Will of the Crystal that the next Age of Thra is Age of Skeksis!

SkekUng was the Skeksis counterpart to urIm the Healer. He was a fierce warrior who succeeded skekVar as General, then later became Garthim Master during the Garthim War. After the death of skekSo, skekUng became emperor after a power struggle with skekSil.

When the Gelfling began to form their resistance, and the Skeksis found skekMal on the brink of death, skekOk suggested calling the other Skeksis back to the Castle, with skekZok opining that skekUng was "a strong warrior".[2] Summoned to the castle after the Second Battle of Stone-in-the-Wood, skekUng took over skekVar's place as General and became leader of the Garthim army that skekTek created to deal with the Gelfling.[3] When the Skeksis learned of a Gelfling prophecy that foretold the healing of the Crystal by Gelfling hand, and thus, the end of their rule over Thra, skekUng led the Garthim to the extinction of the Gelfling population; only two, Jen and Kira, survived, to be adopted and raised by the urRu and Podlings, respectively.

After the end of the Garthim War and the death of skekSo, he formed a political alliance with skekTek and skekNa. He sought to claim the Skeksis' throne by challenging his greatest rival, skekSil the Chamberlain, to Trial by Stone. His brute strength won him the day, and he had the Chamberlain banished. However, his coronation ceremony was interrupted when the Crystal summoned the Skeksis to the Crystal Chamber, revealing that at least one Gelfling had survived the Garthim War, and was heading for Aughra's observatory. SkekUng sent the Garthim after Jen, but they failed in their mission and brought back Aughra instead. His authority weakened, skekUng became suspicious over the loyalty of skekZok the Ritual Master, whose constitutional claim to the throne matched his. His anger was further deepened when he was unable to rejuvenate himself with Podling essence.[3]

When skekSil returned to the Castle with Kira, skekUng reinstated his former rival, but reasserted his authority by listening to skekTek's suggestion about draining her essence, in defiance to skekZok's demand for her immediate execution. Unaware of skekTek's death during Kira's subsequent escape, skekUng became increasingly paranoid, planning to execute skekTek and send the Garthim to destroy all life on Thra in order to avoid the Gelfling race suddenly regenerating itself. His plans were foiled, however, when Jen healed the Dark Crystal and reversed the Great Division. After fusing with his urRu other, urIm, the newly formed UngIm revived Kira and lead the urSkeks away from Thra.[3]

Some hundred trine later, skekUng was revived alongside his seven other comrades and urRu counterparts after the Fireling Thurma took a shard from the Crystal in a misguided quest to restore her homeland's dying Mother Sun. SkekUng allowed her to escape, knowing that without the Shard the Gelflings would never be able to stop him. He proceeded to have skekSil banished again, blaming him for his past defeat, and engaged the Royal Guards in a battle which was subsequently interrupted by Jen, who took control of the Garthim and had the Skeksis incarcerated.[4] During his detention, he challenged the Crystalline Eminence to gaze directly into the once again darkened Crystal,[5] resulting in him obeying skekUng's order to release him and his comrades.[6]

After escaping and securing the Crystal chamber, skekUng attempted to seize Aughra and Kira, but the two barricaded themselves in the Castle's upper towers.[7] He demanded that the Crystalline Eminence tell him of any secret passages he could use to gain access to the towers, only to imprison him upon realizing that his exposure to the Crystal had driven him insane. Upon seeing Jen return to the Castle riding Bohrtog, skekUng summoned the Crystal Bats to attack him.[8] Jen fell from his mount and skekUng nearly finished him, but was stopped by Kira, who carried Jen to safety. Frustrated by his lack of progress, skekUng drained the Crystalline Eminence's essence and proceeded to use his newfound strength to break down the barricades with his bare hands.[9] He eventually breached the fortifications and entered Jen and Kira's chambers, but was separated from them when the urRu summoned a premature Great Conjunction, which shattered the Castle.[10] When Thurma returned with the Shard upon realizing the error of her ways, skekUng was helpless to stop her from healing the Crystal and merging the Skeksis and urRu once again.[1]

SkekUng was physically the strongest of the Skeksis after Emperor skekSo, a fact likely due to his ability to assume positions of geometric harmony unusual in his kind.[11] His robes were decked in armor pieces made from a Garthim carapace, which rattled as he moved and his spurs struck sparks as he walked on the castle's stone floor.[3][12]

The Garthim Master was a stern, ruthless, wrathful and short-tempered individual who was far more straightforward than his scheming rival skekSil, tactlessly expressing his opinions and favoring swift action over protracted plotting.[13] He was also sadistic, to the point of finding tearing Gelfling apart to be his greatest joy,[11] and was open to wiping out all life on Thra to protect his position.[3] SkekUng did, however, show some deference to protocol and tradition, refraining from showing his imperial ambitions before skekSo's death (even bowing to his dying predecessor to display his loyalty and demanding the others do the same) and, unlike skekSil, not taking the Scepter of Office until recognized as the new emperor by his fellow Skeksis.[13] He was also not needlessly bloodthirsty to his own kind, preferring to banish his rivals rather than kill them,[13][4] and even reinstated his disgraced enemy skekSil to his former position when he captured Kira.[13]

Despite his overall boorishness, skekUng was an intelligent and cunning individual in his own right. Unlike his predecessor as General, skekVar, who was an incorrigible bully and ableist, skekUng did not look down on Skeksis suffering from bodily mutilations like skekTek and skekNa, valuing them for their support and competence rather than their strength. He was also an effective commander of the Garthim during the Garthim War and let Thurma escape with the Shard of the Division, knowing that its theft benefited him and the other Skeksis,[4] and later manipulated the Crystalline Eminence into looking at the darkened Crystal, putting him under skekUng's command.[6] Finally, he was one of the bravest and most level-headed of the Skeksis, as he did not panic like many of his comrades did when he learned of the existence of Jen and Kira, and was one of the only Skeksis who did not beg Jen to not heal the Crystal.

SkekNa was the only Skeksis skekUng trusted fully, and the two became firm allies during and after skekUng's successful bid for the throne. So reliable was the Slave Master that skekUng planned to promote him to the rank of Patriarch, which would have placed him above both skekZok and skekSil in the Skeksis' hierarchy.[3]

After skekSo's death, skekSil became skekUng's bitterest rival, as he was of high enough rank to legitimately challenge his claim to the throne. SkekUng openly disliked the Chamberlain, being particularly irritated by his whimper, something skekSil took advantage of to annoy him. He was further disgusted by skekSil's disrespect to skekSo during the latter's final moments, and his disregard for protocol during the succession dispute. Nevertheless, skekUng preferred to banish his rival rather than put him to death, and reinstated him to his former position after he brought Kira before him.[13]

SkekUng found common ground with skekTek in his dislike of both skekSil and skekZok, and won his support during his bid to become Emperor. Once he ascended the throne, however, skekUng quickly lost his previous civility and accused the Scientist of being a fraud when the Podling essence skekTek had prepared for him failed to restore his youth. He would, however, continue to value the Scientist's advice, particularly if it involved humiliating skekZok.[13]

While respecting skekUng's prowess in battle,[2] skekZok held little regard for him as Emperor, being repulsed by his lack of etiquette, table manners and sense of urgency in immediately killing off the Gelfling. In return, skekUng disliked and distrusted skekZok, considering him an "idiot archimandrite" and suspecting the Ritual-Master's ambitions,[3] being particularly flustered at his lack of faith in his Garthim soldiers.[13]

While he desired to succeed him as Emperor, skekUng seemed to have some genuine respect and loyalty for skekSo, as he did not show his ambitions until after the latter's death, unlike skekSil. During skekSo's final moments, skekUng urged his fellow Skeksis to kneel and bow before their dying leader and was visibly disgusted by skekSil's disrespect of him.

Behind the Scenes[edit | edit source]

The character's pre-production notes described him as perpetually angry, lacking subtlety and as never speaking any quieter than a "deep resonant bellow".[14]

Henson initially conceived of skekUng as a frightening character. Puppeteer Dave Goelz however, drawing on his own experiences in the military, decided to represent him as an "obtuse general" relying on subordinates to repair the damage he causes.[15][16]

Because the rivalry between skekUng and skekSil was an important part of the movie, the writers didn't want to repeat it in The Dark Crystal: Age of Resistance. Instead they set up skekSil with skekVar to create the background to skekSil's future conflict with skekUng.[17] 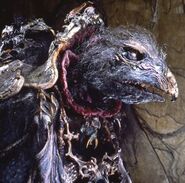 SkekUng with his urRu counterpart, urIm the Healer.
Add a photo to this gallery

Retrieved from "https://darkcrystal.fandom.com/wiki/SkekUng?oldid=25437"
Community content is available under CC-BY-SA unless otherwise noted.