The Dark Crystal Wiki
Register
Don't have an account?
Sign In
Advertisement
in: Skeksis, Males, The Dark Crystal: Age of Resistance characters,
and 2 more

Edit
watch 01:55
Cobra Kai Season 4 - The Loop
Do you like this video?
Play Sound

Killed when his counterpart, urVa killed himself in order to stop him

All the hunters, warriors, now their strength is my own.

SkekMal was the Skeksis' Hunter and counterpart to urVa the Archer.

In his youth, skekMal was considered the most beautiful of the Skeksis by Aughra.[2] His career and distaste for castle politics dated back to at least the early Age of Division, as songs were told about him among the Stonewood and Spriton Clans during Thriya's expedition. His depredations became legendary among the Gelfling, who featured him in cautionary tales, though none suspected that he was in fact a Skeksis, calling him simply "the Hunter", "Bone-Mask" or "Four-Arm" among other names. Some songs connected skekMal with the Valley of the urRu, with one claiming that it was his birthplace, while another narrated how it was where he cut out his own soul, which the Spriton believed explained the strange moans emanating from the Valley.[3]

At one point during the late Age of Division, he ventured into the Crystal Desert and met Rek'yr, who learned his true name and guided him during a hunt, though he later vowed to never accompany him again.[4]

After Rian escaped with proof that the Skeksis were draining Gelflings for their essence, skekMal was summoned by skekSil, having been replaced at skekSo's side by skekVar, to hunt him down,[5] and managed to capture him, killing his father Ordon in the process. He was later convinced by the Chamberlain to give him temporary custody of the Gelfling for his own agenda.[1] When Rian escaped, skekMal renewed his pursuit of the Gelfling to the Crystal Desert where, at the Circle of the Suns, he injured both skekGra and urGoh, but got fatally wounded by his counterpart, urVa, while abducting Brea to bait Rian to pursue him.[4]

SkekMal managed to return to the Castle, only to collapse before his fellow Skeksis. He was brought to the Chamber of Life where skekTek did his prognosis of the Hunter's condition. After removing the arrows from skekMal, the Scientist determined that the Hunter suffered from severe exsanguination, extreme distress to the humus, imbalance of intrinsic fluids, and manifold ruptures in his corporeal morphology. SkekTek announced that skekMal's expiration was inevitable to the horror of the Skeksis.

The Emperor, unwilling to admit they were mortal, spared every drop of essence for skekMal, but even that was not enough to heal the Hunter. Faced with no alternative, skekSo planned to drain all the remaining Gelfing captured from Stone-in-the-Wood. Aughra, finding her way into the Castle, brokered a trade: her essence for the lives of the Gelfling. During the initial process of draining, Aughra became dust, and skekMal remained lifeless. He was assumed dead by his fellows, who decided to honor him by cleaning his body, armoring it, and raising his death-like corpse in the throne chamber so that he would still be among them even in death.

It was later revealed that he had been in a comatose state and quickly revived awakening to find the Castle empty save for skekTek. After learning the whereabouts of the other Skeksis from skekTek, he rushed to join the battle.

SkekMal inevitably met his end at the Second Battle of Stone-in-the-Wood when, while gloating about conquering death and that "nothing can stop the hunt," and attempting to kill Rian once more, urVa regained consciousness and took his own life to end his Skeksis counterpart for good, restoring Aughra.[6]

SkekMal was the most ferocious and bloodthirsty of the Skeksis, feared by all his comrades save for skekSo, who was rumored to be the only one capable of controlling the Hunter.[7] As his true loyalty was only to himself, skekMal did not reside in the Castle of the Crystal, preferring instead to live in the wild.[5] He did not share his comrades' love of political intrigue, developing instead a fanatical obsession with hunting worthy prey, taking their remains as trophies which he believed conferred him their strength.[1]

By the late Age of Division, he had become so skilled at his profession that he had trouble finding any real challenge,[7] to the extent of finding proposals of hunting Gelfling to be insulting.[5] At that point, Rakkida were among the few creatures he still considered worthy of his attention.[8] While contemptuous of his more sedentary brethren, he was nevertheless quick to violence against anyone who slandered the Skeksis' good name.[5] He was also capable of delaying killing his prey when such restraint was advantageous to his comrades, though he would make it clear that denying him his prey would have resulted in death, despite murder being a taboo among the Skeksis.[1]

SkekMal was also far braver than most of his brethren, and didn't seem to share their obsession with cheating death, being never shown trying to extend his lifespan such as Essence or the power of the Crystal and showing no fear when Ordon pushed him and himself into a field of Gobbles, saying that he's taking Ordon with him as the Gobbles trapped and bit them[5]. He also had an incredible tolerance for pain and willpower, being able of taking Brea with him from the Circle of the Three Suns to the Castle of the Crystal despite having been shot with three arrows from the Archer, and how grave his injuries and the pain were until his body finally betrayed him at the castle, while UrVa himself passed out from the pain shortly after shooting his third arrow. However he was not without some fear of death as he was terrified when he realized what UrVa was about to kill himself, screaming "Archer what have you done ?! " before his final death[6].

SkekMal was a highly talented fighter, being able to overpower both Ordon and Rian in a duel with all four of his arms[5] and throw darts with enough precision to hit a victim's hand from a distance.[4] He was agile enough to navigate through tree canopies with acrobatic grace and his skill as a tracker was unmatched, having been able to locate Rian by scent with only a rag from his uniform.[5] He frequently coated his snares with the poison of the Two-Eyed Stickler.[9]

Rian became skekMal's latest prey, after skekSil summoned him. He was insulted by being called to hunt a mere Gelfling, but when he informed him that he had bested both skekSil and skekTek he became intrigued. When he was told by skekSil that Rian was spreading lies about the Skeksis, he made it his personal mission to hunt the rebel.[5] skekMal wished to claim Rian's "lying tongue" as a trophy.[1] At every moment he took every opportunity to taunt the Stonewood warrior, reminding him of his failures, especially his father's death.

SkekSo was rumored to be only Skeksis that was able to control skekMal. Despite being subordinate to the Emperor, their relationship was not bad. skekSo displayed this when he used every measure to save skekMal's life. Even when he believed skekMal was dead, skekSo wished to honor the Hunter in a somewhat macabre fashion by having his corpse displayed in the throne room.

The Hunter cared little for skekSil's politicking and squabbles in the court of the Castle, thinking them petty. However the two did find common ground in one area: while skekMal sought trophies and skekSil sought prestige, fundamentally both pursued power. It was in this aspect that skekMal did acknowledge skekSil as a fellow hunter, albeit in a different fashion.

Like the other Skeksis, skekMal belittled skekTek, seeing him as weak. When awoken from his comatose state, seeing that the Scientist had remained at the Castle while their brethren went to battle the Gelfling he called him a coward.

In J.M. Lee's Shadows of the Dark Crystal, skekMal is a figure of legend among the Spriton, who used the hunter's reputation to frighten children into behaving. Spriton song tellers narrated of how Jarra-Jen once encountered and escaped the Hunter, not knowing he was a Skeksis. Kylan himself was made an orphan and adopted by Maudra Mera after the hunter killed his parents.

All the Skeksis are violent in their own ways, but the Hunter is just better at it. [...] He's not here to entertain you - he has work to do. Everyone is scared of him, including other Skeksis, because the Hunter is fear.

The character was first conceived by Halle Stanford during the pre-production of the ultimately scrapped animated series Great Conjunction in 2012,[11] and was envisioned as a "scarier Skeksis than even the Emperor". As the character was required in intense action scenes which would highlight his athleticism, skekMal was the only Skeksis to be portrayed via a full-body puppet. In most scenes, the suit was worn by performer Nick Kellington, while Kevin Clash was in charge of its mouth movements. In fight scenes, stuntman Ian Kay took over the role in a suit sporting a head lacking animatronic components, thus reducing the puppet's weight.[10] The Hunter's retractable arms were operated by two additional puppeteers in blue-screen suits, who were digitally removed in post-production. 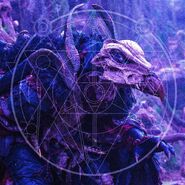 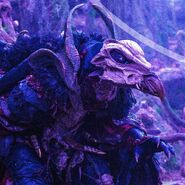