Castle of the Crystal

Do you see this face? Once this was a beautiful face, but then came knowledge.

SkekLach was the Skeksis' Collector, and counterpart to urSen the Monk.

Unlike her comrades, skekLach was unsurprised to see the Crystal fail to sustain herself and the other Skeksis, as it had failed for days beforehand. SkekLach later irritably departed with skekOk the Scroll-Keeper for Ha'rar to perform a Tithing Ceremony, snotting and coughing the entire way. When Brea joined the expedition, skekLach was utterly bored by her words, and dissuaded her from reading skekOk's "forbidden" library, warning her that her pursuit of knowledge would have resulted in the same facial disfigurement she had, though skekOk claimed skekLach had always been ugly.[1]

Having arrived back at the Castle of the Crystal with skekOk, skekLach found the tithing to be "sadly lacking". The Collector supported punishing skekSil for failing to capture the deserter Rian, but quickly switched to supporting skekTek's punishment at the prospect of witnessing a Peeper beetle, a rare occurrence.[2]

Over the next few days, skekLach supported the Emperor and the General's plan to harvest all the Gelfling for their essence, as they gradually healed her diseased face,[3] and when several Gelfling escaped through the catacombs skekLach and skekVar were ordered by skekSo to kill them. Although failing to murder the fleeing Gelfling, skekLach was able to kill an Arathim Silk Spitter protecting them.

Like most of the Skeksis, the Collector donned new armor and participated in the Second Battle of Stone-in-the-Wood. After skekMal was killed, allowing Aughra to return from the dead, skekLach expressed her fear of Aughra's return. At the climax of the battle, skekLach was killed by Deet, who redirected a beam of the Darkening launched by skekSo onto her and caused her head to explode.

After her death, the title of Collector was passed on to the Treasurer skekShod.[4]

You are all a permanent part of my collection. I collect things! It's what I do! Collect and keep!

In the continuity established by Legends of the Dark Crystal, skekLach was a masterful tactician who, along with skekUng the Garthim Master, devised the strategies used in capturing Gelflings during the Garthim War. His abilities brought him great favor with Emperor skekSo, though this favoritism was resented by skekVar the General and skekSil the Chamberlain, both of whom, like skekLach himself, ultimately desired the throne for themselves. SkekLach blackmailed skekTek the Scientist into secretly withholding Gelfling essence from the Emperor, then told the Emperor that essence supplies were in fact diminishing, directly contradicting skekVar's claim that Gelfling essence was still plentiful. The Emperor ordered the disgraced skekVar to pledge his loyalty to skekLach, thus leaving skekSil as the only contender for the Emperor's favor. SkekLach's plans were temporarily thwarted when one of his Gelfling acquisition raids resulted in the destruction of multiple Garthim during the Battle of Namopo Valley.[6]

Despite this setback, skekLach was still very much in the Emperor's favor, much to the rage of skekSil. When Larh and Neffi entered the Castle of the Crystal to rescue the prisoners taken from the Namopo Valley, skekLach captured Larh and coerced him into becoming his spy, ensuring his loyalty by sending his Spyeyes to attach themselves onto the Gelfling. Unbeknownst to the Collector, skekSil had released the Gelfling prisoners, posing as skekLach himself. When the Battle of Bah-Lem Valley commenced, a captured Gelfling prisoner reported that "skekLach" had released him. SkekSil used the opportunity to openly accuse the Collector of treason, and challenged him to Trial by Fire. However, skekLach won the ordeal, as he had been strengthened by drinking the Emperor's Gelfling essence. His victory ensured he remained in the Emperor's favor, though he was unaware that his plan to use Larh as a spy had failed, as the Spyeyes had been destroyed.[5]

SkekLach was a pessimistic, cynical and melancholic Skeksis tormented by memories of her youth and hatred of her job. She claimed to have once been beautiful, and attributed the appearance of her pustules to her thirst for knowledge. The pustules resisted all attempts at treatment and further exacerbated her boorish attitude,[1] to the point where she became desensitized to them leaking fluid on her food, which skekLach ate anyway.[3] The Collector was also materialistic and covetous, habitually stealing precious objects not included in tithing ceremonies and storing them in her chambers.[7]

Though formally responsible for collecting tithes from the Gelfling as part of their obligations to the Alliance of the Crystal, by the late Age of Division skekLach had become so bored with her occupation that she left most of the talking to her colleague skekOk, and treated members of the Vapran nobility with barely inhibited rudeness. Unlike the other Skeksis, skekLach was unsurprised that the Crystal failed to sustain her and the others, and always expected the worst from her comrades.[1]

The only times skekLach ever displayed real joy were when watching torture sessions,[1] bullying Gelfling,[8] seeing her rivals get scolded by The Emperor and when given the opportunity to kill fugitives.[9] The Collector shared skekVar and skekAyuk's belief in unlimited exploitation of Gelfling essence, believing that the Skeksis had a right to immortality.[3]

Despite their bickering, skekLach appeared to have formed a genuine friendship with skekOk, as they were often seen together, and the latter gave The Collector advice on how to treat her pustules, as well as being genuinely upset after witnessing skekLach's death.

Like most of the Skeksis, skekLach both disliked and mistrusted skekSil with skekLach being unsurprised should she hear that skekSil had caused trouble. Whenever the Emperor got angry at the Chamberlain, skekLach would tend to laugh at skekSil's misfortune and even cheered at the thought of skekSil being skinned alive by skekMal. The one time skekSil did surprise skekLach was when skekVar informed the Collector and the Emperor that the Chamberlain had saved The General's life, this bewildered The Collector as she knew skekSil both hated the General and desired to have skekVar's position as The Emperor's counsel.

The Collector and the General were not particularly fond of each other, even so skekLach supported skekVar's suggestion to drain all the Gelfling since it would mean using the essence to heal his infected face as soon as possible. When skekVar ordered skekLach to help him kill the escaping Gelfling prisoners, skekLach was not afraid to admit that skekVar was right about the Collector enjoying the task. While they had similar interests, the two were not close friends. skekLach enjoyed seeing skekVar being berated by skekSo, while the General found skekLach's pustules disgusting and would threaten to slice off the her hand should she attempt to steal his food. Should the other Skeksis hurl insults at skekVar, it wouldn't be long until skekLach joined in.

In describing skekLach in The Dark Crystal: Age of Resistance, Jeffrey Addiss jokingly defined the character as the "Eeyore" of the Skeksis. Puppeteer Helena Smee had to apply fresh slime to the character in-between takes, and often evoked the disgust of the rest of the crew by getting it accidentally smeared in her hair or dress. As the Collector was meant to be the Skeksis with the worst personal hygiene, the costume designers made the Collector's robes especially oily and greasy.[10] 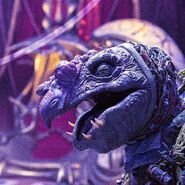 Retrieved from "https://darkcrystal.fandom.com/wiki/SkekLach?oldid=24511"
Community content is available under CC-BY-SA unless otherwise noted.