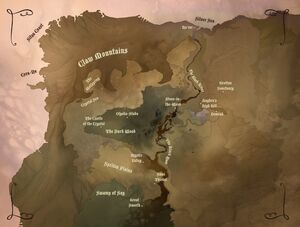 The Skarith Region is a region of land in The Dark Crystal: Age of Resistance. This region includes the mountainous area of Grot.

By the time of Jen' s quest the area had become a barren desert. The region was rejuvenated after the Gelfing completed the prophecy.

Retrieved from "https://darkcrystal.fandom.com/wiki/Skarith_Region?oldid=17866"
Community content is available under CC-BY-SA unless otherwise noted.