Princess of the Vapra Clan

Gelfling need an All-Maudra who will not be swayed from the path set for us by the Lords of the Crystal, a beacon of light in these dark times. I shall be that All-Maudra.

Seladon was a female Gelfling of the Vapra Clan who lived during the late Age of Division. She was the oldest daughter of All-Maudra Mayrin and Sifan captain Kam'lu, and the eldest sister of Tavra and Brea. After the death of her mother, she proclaimed herself the new All-Maudra and attempted to restore the Alliance of the Crystal, but failed when the Skeksis openly revealed their true intentions. With no other choice, Seladon eventually joined the Gelfling resistance.

The first daughter of Mayrin and Kam'lu, Seladon was named in her grandmother's honor.[2] Seladon was present for the tithing ceremony, and was irked by Brea questioning the morality underpinning it. She later suggested that her mother Mayrin send Brea to the Order of Lesser Service for wiping Elder Cadia's memory.[3]

Although Seladon reassured herself that she did the right thing, Tavra made her realize that the true source of her anger was her mother Mayrin, for not recognizing her work. Seladon then went to appraise the damage to Cadia's memory, and was later present when her mother tried to postpone audiences to several of subjects, missing her other two daughters. Seladon convinced Mayrin to put duty first, parroting her own words back to her, which Mayrin accepted and they went to hold court together.[4] Seladon was later alerted by palace guards of heresy being spoken beneath the throne room, and she arrived to see Brea with Lore.[5]

Lambasting Brea for wiping Elder Cadia's memory, fleeing the Order of Lesser Service, and conspiring to overthrow the Skeksis, Seladon and Brea's argument became increasingly heated until Mayrin arrived to break it up. Unfortunately for Seladon, who tried to sway Mayrin to her side by evoking her responsibilities, Mayrin chose to investigate Lore and sent Seladon away to examine the Landstrider herds, much to Seladon's confusion and anger. Before departing however, she noticed Deet and Hup, the former disguised as a Vapran and piquing Seladon's interest. After interrogating Deet, Seladon dreamfasted with her and found herself within the Dream Space, where Aughra explained that the Crystal of Truth brought them there to ask for aid in overthrowing the Skeksis. Seladon denounced it as treason, declaring that they would be nothing without the Skeksis. She urged her mother to remember whom she served, only for Mayrin to say she served Thra. Seladon denounced Aughra as a power hungry witch, and was ejected her from the Dream Space. Seladon ordered guards around Deet and Hup while she reported to the Skeksis. Eventually Mayrin arrived with Brea, Deet, and Hup, and despite Seladon's protestations, Mayrin launched into a speech denouncing the Skeksis until skekVar killed her. Seladon blamed Brea for her death until skekZok praised her loyalty. Brea tried to reason with Seladon, but Seladon was unmoved and called the paladins in to arrest them all, allowing the Skeksis to take them away even as they named her All-Maudra.[6]

Bow before me, Maudra Fara. And together we will prove our loyalty to the Skeksis and snuff this fire before it burns us all.

During Mayrin's funeral, Seladon sent six pieces of the Living Crown to the other six Gelfling Maudras, to be returned to her as part of the coronation ceremony. During the wait, Seladon actively declared her own mother a traitor and refused to return her body to Thra, insisting instead that she be cremated to set an example of her.

When Maudra Fara of the Stonewood arrived with her piece of the Living Crown, she asked Seladon for the truth. After Seladon told her everything from her point of view, Fara assured her that the Stonewood revered Mayrin as a role-model and declared they would avenge her. Seladon rebuked Fara for her treachery to the Skeksis, and subsequently demanded an oath of loyalty to herself and her fellow Maudras from the other clans. Maudras Argot, Mera, Ethri, and Seethi made the oath, while Fara and Laesid refused, despite knowing this would have been a declaration of war. Seladon insisted upon her rights as Mayrin's heir, but Fara insisted that the All-Maudra was not always Vapran, and challenged Seladon for the crown. Even though the other Maudras began to argue with Fara, Seladon accepted the challenge and allowed Fara the choice, and she chose a Trial by Air, to take place in Raunip's Pass. While Fara prepared, Seladon donned a Garthic-style outfit, complete with foreboding makeup. Entering the throne room, she immediately forfeited the Living Crown, claiming it to be worthless and positing her new black crown as that of the All-Maudra. Laesid accused her of defiling her mother's legacy, but Seladon said Laesid invited ruin with their "feckless rush to war". Although Fara insisted that Seladon was not All-Maudra, Seladon hotly contested this, prompting Fara to take to the air in a rage. Seladon demanded that Fara bow, but when she refused, Seladon yanked her out of the air to crash amidst the rubble of the old Vapran throne, destroying the Living Crown in the process. Seladon then claimed that the "discord" was a result of her mother. She warned that they were on the brink of anarchy, and offered Fara one last change to join her and "snuff this fire before it burns {them} all", to which Fara defiantly replied "As you burned your own mother!" Angered, Seladon had her and Laesid escorted from the citadel and demanded the obedience of the other Maudras, which they gave.[1]

Arriving at Stone-in-the-Wood after the failed Stonewood Rebellion, Seladon mocked Aughra's advice and went to the Castle of the Crystal to seek clemency for the rebellious Gelfling, not realizing that Aughra dexterously placed her eye in her Skeksis-style dress. When she did arrive before the assembled Skeksis, she pleaded for the Stonewood Clan to be released, to which skekSo tersely said "no", resulting in snickers. Not losing stride, Seladon then insisted that the other six Gelfling Clans were loyal and asked for mercy for them, to which skekSo also replied, "no", resulting in laughter. Becoming unnerved, Seladon nonetheless called skekSo "as wise as {he was} fair", and asked that punishment be reserved for those who spread the "filthy lie" that they drain Gelfling, to which skekVar replied that they did drain Gelfling, causing yet more laughter. Shocked but recovering, Seladon then suggested sending seven Gelfling from each clan in exchange for peace, as skekZok originally asked from Mayrin, but skekSo replied with "no" a third time, and the Skeksis mocked her for selling out her own. Finally growing desperate, Seladon begged that they at least spare Brea and Tavra, and skekSo screamed "no" back to her, devolving into uproarious laughter as the Skeksis mocked her as the "ruler of the dead", shredded her Skeksis-inspired outfit, and then had skekAyuk drag her away by her hair for draining. In prison, Seladon noticed Brea, and blamed her for her predicament until Tavra arrived, the Ascendancy mocking their squabbles through Tavra's mouth, rebuking Seladon's requests that Tavra free them.[7]

Gagged and shackled to be drained of essence in order to heal skekMal, Seladon could do nothing until Aughra arrived and offered herself to the Skeksis in return for the Gelfling's release. Seladon accompanied the Gelfling leaving the castle, helping to carry Tavra when she was wounded fighting skekVar and skekSil and convincing Maudra Fara to stop when Tavra was overcome by her wounds. Broken, Seladon apologized for all her wrongdoings, realizing her loyalty to the Skeksis was a mistake. When Tavra died, Seladon made up with Brea and they mourned Tavra's death together.[8]

Seladon arrived in Stone-in-the-Wood with the company and participated in the battle beside her sister Brea, "for Tavra". Seladon took to the air, dropping bombs on the Skeksis, until skekOk launched several blades at Seladon. She would have been struck from the air, but Maudra Fara quickly intervened and pushed Seladon aside, having her own wings sliced off by the blades instead of Seladon's. Seladon landed and moved Fara to safety from where she crashed, but Fara's wounds were too serious and she died shortly afterward, Seladon comforting Fara's crying Fizzgig Baffi. Seladon then returned to the battle, dueling skekEkt, until the other Gelfling Clans arrived and Deet routed the Skeksis by killing skekLach. Seladon then celebrated with everyone else.[9]

As the oldest daughter of All-Maudra Mayrin, Seladon differed from her two younger sisters in openly striving for the Vapra throne. Serious and proud, she strove to prove herself a worthy successor to her mother in the eyes of the Skeksis.[10] She was a firm believer in the stability provided by the Alliance of the Crystal and constantly derided her youngest sister Brea for questioning the Skeksis' intentions,[11] believing her actions reflected badly on her family's reputation.[10]

Ultimately, her stoicism was a mask to hide her insecurities, stemming from her mother's perpetual formality and apparent coldness, as well as what she perceived as preferential treatment towards her younger sister Brea. Her resulting bitterness translated into a distinct lack of empathy towards her constituents, expecting even the poorest of her subjects to participate in financially crippling tithing ceremonies and showing a willingness to sacrifice her subjects should her overlords have desired it.

Like her mother, Seladon was conscious of how her status and its trappings depended almost entirely on the favor of the Skeksis. However, Seladon's devotion to them was much more deeply rooted, becoming agitated whenever the Skeksis' intentions or orders were questioned, to the point of denouncing her own family members as heretics worthy of death, even denying them proper funerary rites. She was, moreover, prepared to forego Gelfling traditions in favor of more brutal Skeksis methods of rule should the former impede her quest for power. Nevertheless, she naïvely believed in the Skeksis' good faith, refusing to accept her overlords' true nature until her imprisonment, and even then sought to divert blame to Brea, convinced that her interference had prompted the Skeksis' actions, until the Arathim showed Tavra under their control. 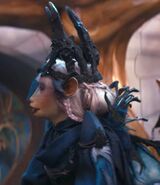 Seladon and Fara
Add a photo to this gallery

Retrieved from "https://darkcrystal.fandom.com/wiki/Seladon_II?oldid=25385"
Community content is available under CC-BY-SA unless otherwise noted.