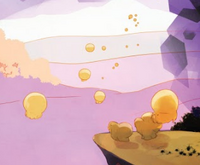 The Lunarkin were creatures native to Thra. From a distance, their morphology appeared to be golden balloons. When Jen and Kira questioned Thra's prosperity, the Crystalline Eminence used the Sceptre of the Bats to show an illusion of a paradise with several Gelfling, Podlings and various creatures, with the Lunarkin being shown to be preparing for their great migration.[1]

Retrieved from "https://darkcrystal.fandom.com/wiki/Lunarkin?oldid=18677"
Community content is available under CC-BY-SA unless otherwise noted.