Edit
watch 01:33
Wiki Targeted (Entertainment)
Do you like this video?
Play Sound

At the end of the Garthim Wars

Killed by skekZok, then the urSkeks revived her and made her immortal for protecting the Crystal with Jen

Co-ruler of the Gelfling Nation

Kira was a female Gelfling who was raised by the Podlings after her clan had been destroyed during the Garthim War. One of the last of her kind, she joined fellow survivor Jen in his quest to heal the Crystal and put an end to Skeksis tyranny. She was killed in the attempt, but was resurrected by the newly reformed urSkeks in recognition of Jen's courage. She later married him and ruled by his side for 100 trine, regenerating the Gelfling race in the process.

As she and her husband aged however, administration of the new Gelfling Nation was entrusted to the Crystalline Eminence, whose misrule corrupted the Crystal and nearly caused the extinction of the Fireling race. After defeating the Skeksis one more time, the two co-rulers of Thra came to terms with the consequences of their inaction and ascended to the stars with the urSkeks, leaving the Crystal under the stewardship of Kensho.

The first thing I remember is fire.

Born during the late Age of Division, Kira's clan was destroyed during the Garthim War. Her mother was captured by the Garthim shortly after hiding her in the hollow of a tree, and Kira subsequently fended for herself until she was adopted by the Podling Ydra, who named her. Convinced she was the last of her kind, Kira was taught the Podling language and further learned the art of Animal Soul Speaking. However, she was never taught to read or write, and was told to avoid Gelfling ruins.[1]

Some trine later, while accompanied by her pet Fizzgig, she encountered Jen, whom she dreamfasted with. She took him to her village by boat, and crippled a Crystal Bat with her bola, though not in time to prevent it from seeing their location. Once at the village, she learned of Jen's mission to take the Shard of the Division to the Castle, though he remained ignorant of what to do with it once there. The village was then attacked by the Garthim, who almost caught the pair, but were stopped by an exiled skekSil. The next day, Kira and Jen entered the Houses of the Old Ones, where they discovered the Wall of Destiny, which explained that a Gelfling would have to use the Shard to heal the Crystal and overthrow the Skeksis before the next Great Conjunction. SkekSil interrupted them and offered to take them to the Castle in order to make peace with the Skeksis, but Kira saw through his deception and convinced Jen to escape with her. She summoned a pair of Landstriders and the two hurried to the Castle.[1]

Upon arriving outside the Castle, Kira charged at a troop of Garthim carrying Podlings taken from her village. After the Garthim killed the Landstriders, Kira took Jen and, using her wings, descended the Castle moat and the pair entered via the Teeth of Skreesh. Within the catacombs, they were attacked by skekSil, who buried Jen under a rock slide and dragged Kira to the throne room, where most of the Skeksis were seemingly horrified by her. While Kira struggled in vain to escape, skekUng ordered skekTek to drain her. Kira was taken to the Chamber of Life, where skekTek shackled her to the essence draining chair and attempted to drain her essence. Fortunately, she was able to fight the process while Jen telepathically urged her on. Kira then called to the animals imprisoned in the laboratory to free her. After a vicious struggle in which the animals broke from their cages and killed skekTek, Kira was released and met Jen in the Crystal chamber.

The two were discovered by the Skeksis and, in the ensuing confusion, Jen dropped the Shard. After Fizzgig was seemingly killed trying to defend it, Kira flew into the fray and took the Shard, only to be surrounded. She rebuffed skekSil's offer of clemency and threw the Shard to Jen, who was perched on the Crystal. In response, skekZok fatally stabbed her in the back, prompting Jen to heal the Crystal immediately after. Once the Skeksis were consequently restored as the urSkeks, their leader UngIm resurrected Kira in gratitude for her courage, and left Thra in her and Jen's care.[1]

Guardianship of the Crystal[]

In the Dreamfast I feel frost. I see great cracks, as if Thra were shrinking into itself. When did we last step outside these walls?

During the Age of Power, Kira eventually married Jen and the two restored their nearly extinct race, thus forming the Gelfling Nation. When the two reached advanced age, they entrusted the Crystal to the Crystalline Eminence and went into a long sleep, during which the Eminence decreed that visitations to the Crystal for its healing powers were to be conditional on material offerings. One hundred trine after healing the Crystal, the two co-rulers were awoken by the weakened Crystal and were visited by the Fireling Thurma, who requested a piece of the Crystal in order to heal her world's dying sun.[3] During the ensuing argument, Kira and Jen learned from Kensho that Thra had grown sick in their absence, despite the offerings to the Crystal. Thurma eventually cracked the Crystal, causing the return of the urRu and Skeksis,[4] and Kira to weaken.[5] Being too frail to assist Jen in pursuing Thurma and Kensho, she remained in the Castle.[2]

No tears, now... Not for us. The stars are calling.

Enraptured by the singing of the urRu, she joined in their song and summoned Bohrtog, who proceeded to save Thurma and Kensho from a pursuing Skeksis.[7] Through the urRu's song, Kira dreamfasted telepathically with Jen, both appearing as their younger selves, and comforted him when he expressed concern that if the Crystal died it would take her with it.[8] The Skeksis eventually broke out of their confinement and forced Kira, Aughra and a handful of guards to take refuge in the Castle's upper towers.[9]

When Jen returned and was attacked by the Skeksis, Kira lead a troop of archers to defend her husband and took him to their chambers. With both near death, Kira reassured Jen that the end of their lives did not mean the end of everyone else's.[10] The next day, the Skeksis breached the barricades Kira and Jen had erected, but were saved when the urRu summoned a premature Great Conjunction and shattered the Castle, separating the two rulers from their attackers.[11] After Thurma healed the Crystal, Kira and Jen were bathed in its light and rejuvenated. Understanding the error of their ways, they entrusted the Crystal to Kensho and left Thra alongside the urSkeks.[6] 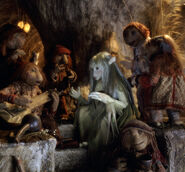 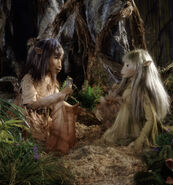 Kira in the swamp

Kira at the ruins