The Dark Crystal Wiki
Register
Don't have an account?
Sign In
Advertisement
in: Males, Podlings, The Dark Crystal: Age of Resistance characters,
and 2 more

Edit
watch 02:56
Doctor Strange in The Multiverse o Madness - The Loop
Do you like this video?
Play Sound

Bury me with my spoon!

Hup was a male Podling who lived during the late Age of Division. Originally a cook in Sami Thicket, Hup dreamed of becoming a paladin after encountering the fraudulent minstrel Barfinnious, with whom he saved a Spriton village from a pack of darkened Fizzgigs.

On his journey to Ha'rar, he met the Grottan Deet, and embarked on a journey which would get him involved in the Gelfling resistance's fight against the oppression of the Skeksis.

Hup originally lived in Sami Thicket, where he worked as a cook in a Spriton inn. He lost his position after striking skekShod the Treasurer, who had repeatedly complained about the food he was served and insulted Hup's intelligence. Tiring of his work, he joined the fraudulent Vapran paladin Barfinnious as his squire.[3]

The two briefly worked as traveling minstrels, though Hup soon grew weary of his lord's dishonesty after being driven out of Mu'din by an elder suspecting the paladin of cavorting with his wife. During a trip back to Spriton territory, he and Barfinnious were welcomed as heroes by villagers besieged by a mysterious beast. There, he befriended Veara, who offered to teach him the art of healing with the herbs he once used in his dishes. When the beast struck the village again, Hup joined the Spriton in attempting to drive it away, while Barfinnious hesitated. Hup subsequently joined the humiliated Barfinnious in his quest to slay the beast.[2]

While tracking the beast however, Barfinnious finally admitted that the stories of his own heroism were fabrications, and left Hup to face the beast himself.[4] He eventually found Veara with the beast, in reality an immature Seedle. He and Veara took the creature to the village, where it was determined that its passive nature and flat teeth were not consistent with the recent spate of attacks. The culprit was soon revealed to be a pack of darkened Fizzgigs, which Hup defeated with the aid of a remorseful Barfinnious. After the two reconciled, Hup announced his decision to travel to Ha'rar and become a paladin alone, with Barfinnious deciding to settle in the village for fear of having his title stripped from him.[5]

While journeying to Ha'rar through the Endless Forest, he rescued the Grottan Deet from a Silk Spitter. After she revealed that she also intended to go to Ha'rar, Hup joined her in her quest to unite the seven Gelfling Clans.[6] Upon approaching Stone-in-the-Wood, Hup warned Deet that clan divisions were too great for any form of Gelfling unity, and was subsequently incarcerated in the Rascal Hole after defending Deet from bigoted locals.[7]

Hup was soon rescued by Deet, and later returned the favor by saving her from a patch of Gobbles. While sheltering a storm afterwards, they witnessed the battle between skekMal, Rian and Ordon, but were unable to stop the Skeksis from taking Rian.[8] Traumatized by skekMal and his own ineffectuality, Hup expressed doubt over his ability to protect Deet, but was reassured when reminded of his past deeds.[9]

Upon arriving at Ha'rar, Hup disguised Deet as a Vapran noble and posed as her bodyguard. Before they could reach the All-Maudra, they were stopped when Seladon identified Deet as a Grottan. Deet dreamfasted with Seladon to prove her words, but then the pair immediately went into a trance, leaving Hup oblivious until Seladon suddenly woke. Disbelieving Deet's experiences, Seladon ordered the pair's immediate arrest, but was stopped by All-Maudra Mayrin, who quickly knighted Hup before moving on to confront skekVar and skekZok. SkekVar slew Mayrin while skekZok had Seladon imprison Hup, together with Deet and Brea.[9]

Hup, Deet, and Brea were subsequently rescued from the Skeksis' carriage transporting them to the Castle of the Crystal through the combined efforts of Rian, Gurjin, Naia, and Lore. Hup accompanied his companions to the Crystal Desert and sang a dirge together for Mayrin. Hup was immediately suspicious and mocking of Rek'yr when he arrived offering passage to the Circle of the Suns.[10]

Arrival at the Circle of the Suns[]

Upon being dropped off with his companions at the Circle of the Suns, Hup took an immediate dislike to skekGra, who mistook him for a slave. He felt further insulted when instructed to act as the narrator of The True History of Thra, which he botched so badly that his role was taken over by skekGra and urGoh. He slept through the performance, thus missing the story's revelations about the Dual Glaive and its importance to the Gelfling in eventually deposing the Skeksis.

When they prepared to leave, skekMal arrived and attempted to attack Deet, whom Hup defended, only to be badly wounded in the process.[11] Hup remained bedridden from his injuries, and although he wished to accompany Deet and Rian, he knew when he was too injured to continue, and simply advised them to be careful.[12]

Later, Hup was upright but still too injured to fight, helping urGoh and skekGra tend to urVa, who had previously fought off skekMal. UrVa briefly roused from sleep when he realized skekMal was on the hunt again, and Hup tried to talk with urVa, but he collapsed into sleep once more. Eventually, urVa awoke fully and, with Hup's help, got to his feet and walked to the cliff edge of the Circle of the Suns. There, despite Hup's screams, urVa jumped off and committed suicide in order to kill skekMal. Afterwards, Hup found the device that could reactivate Lore.[13]

Hup differed from other Podlings in his ambition to become a paladin, instead of being content as a cook, and displayed traits atypical to his race, such as rushing into danger in order to defend those in peril. This loyalty extended to members of other races who looked past his heritage and showed him respect. He also spoke better Modern Gelfling than most of his kind.

He had a great sense of personal dignity, and would lash out against anyone who insulted him with slurs against his race[3] and disliked performing comical roles in public performances.[11] Nevertheless, he was not above conning people for coin.[2]

His preferred weapons were wooden spoons, replacing them whenever they broke during fights.[7] His affinity for spoons went as far as his insisting on being buried with them should he have fallen in battle.[2] Like many Podlings, Hup had a gift for music and was a talented singer.[8]

Hup did have certain prejudices against some Gelflings such as the Stonewood and Vapra clans, but this was principally in response to their contempt of Podlings.

Several videos have been posted on the official social media accounts of The Dark Crystal in which Hup teaches the viewer to speak words in the Podling language.[14] 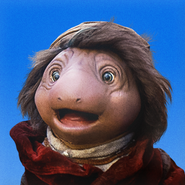 Hup with his spoon

Hup showing some disapproval of the Stonewood Clan 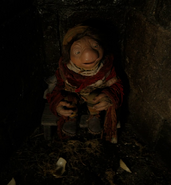 Hup singing, while imprisoned by the Stonewood Clan

Victor Yerrid, the voice and performer for Hup.