Gruenaks were a sentient race of Thra renowned for their technical expertise and prodigious strength. During the Age of Harmony, the Gruenaks had formed one of the world's most prominent civilizations thanks to their early attainment of advanced technology.[1]

Although peaceful, the Gruenaks were attacked by the forces of skekVar,[2] who caused so much destruction that all vestiges of Gruenak culture were lost,[1] to the point where the species was long considered extinct by the late Age of Division.

Two survivors were later captured by Sifan mariners and sold to skekSil, who handed them to skekTek so that they could assist him in repairing the draining chair. To ensure their silence, skekSil had their mouths sewn shut.[3]

They served as slave caretakers in the Chamber of Life, taking care of the animals and imprisoning the Gelflings, so that the Skeksis would later drain their essence. They followed the orders of the Skeksis, but skekTek was mainly the one who ordered them.[4]

Within a few days, the Gruenaks had fully mechanized the essence-draining process, and secretly struck a bargain with skekSil, replacing skekVar's Essence vial with diluted Swothel milk in exchange for their freedom.[5] SkekSil however delayed granting them their promised liberty, and they impatiently cut the stitches on their mouths.[6]

Following their attempt to escape, they were discovered by skekTek, who was enraged by their defiance and attacked them. He killed both of them by throwing one down the Castle shaft and bludgeoning the other to death. Gruenak physiology was later combined to that of the Arathim Spitter to create the first Garthim.[6]

Like the Makraks from The Dark Crystal: Creation Myths graphic novels, the Gruenaks were based on the race of "miners" from Jim Henson's 1978 screenplay of The Dark Crystal. Toby Froud used his father's original pencil sketches as a basis for the Gruenak design, but made them more "sloth-like" by emphasizing the length of their arms.[7] 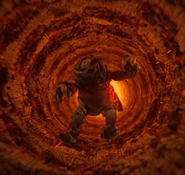