Fizzgigs were small mammalian creatures native to the Endless Forest and the sigil animal of the Stonewood Clan.

They were quadrupeds sporting small paws which were sometimes concealed beneath their fur, which they typically only used when walking for short distances. For longer distances, they preferred to roll into a ball which could move at considerable speed. Their skulls and coat were especially thick in order to protect themselves while moving in this fashion.[1] Most specimens were buff colored, though melanists sometimes occurred.[2]

They communicated primarily through a series of yaps, and would roar when threatened.[3] They also possessed tear ducts, and would weep when saddened.[4] Despite their appealing exterior, Fizzgigs could be ferocious predators, having one of the largest bite radii among the animals of Thra and possessing a second row of teeth around their uvula. When working in packs, Fizzgigs could bring down animals many times larger than them.[1] Darkened Fizzgigs were observed to latch onto each other to form a colossal ball of fur and teeth.[5]

Fizzgigs had been domesticated by both the Podlings[6] and Gelfling of the Stonewood Clan. In contrast to their wild counterparts, tamed Fizzgigs displayed a degree of choosiness over their handlers, though once bonded, they were loyal and protective companions.[7] The Podlings' primary use for Fizzgigs was to act as guards of their plant tendrils,[6] while the Stonewood Gelfling held them in high regard as their sigil animals. To be described as "ferocious as a Fizzgig" was considered a compliment, though it also held the ironic implication that the recipient's bark was worse than their bite.[8]

During the late Age of Division, the Darkening infected a large number of Fizzgigs, which began a series of attacks on rural settlements in the Spriton Plains, only to be stopped thanks to the intervention of Hup and Barfinnious.[5] 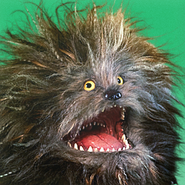 Fizzgig in The Dark Crystal Glossary