Edit
watch 01:36
We're Getting Mutants in the MCU - The Loop
Do you like this video?
Play Sound

To the great All, may the dead become one with Thra again. May we feel their tears in rain and their warmth in the suns. Though they are gone, they remain with us still.

The Dousan Clan ("doo-SAHN")[2] was a Gelfling clan that lived in the Crystal Desert. Its members rarely ventured outside their homeland and navigated the dangerous shifting sands of the desert by riding on large ray-like creatures called Crystal Skimmers. Their patron tree was Oszah-Staba, and their sigil animal the Daeydoim.

They gathered at the Wellspring, and were much less talkative than other clans, speaking largely through a sign language called vojeye. They were minimalists when it came to bodily ornamentation, preferring to decorate themselves with elaborate tattoos. Dousan shamans held ancient rituals involving music, and were known across Skarith for their close affinity with the circle of life and death.

According to the Gelfling creation myth, the Song of the Six Sisters, the Dousan's maternal ancestor had been entrusted by Thra during the Age of Innocence with the gift of studying the skies and the endless heavens.[3]

During the Age of Division, the Dousan's belief system put them at odds with the Skeksis, who forbade them from serving at their Castle.[1] The Dousan were nevertheless not targeted for destruction, and provided the Skeksis with incense[4] and Peeper beetles.[5] At one point, a group of Dousan exiles lead by Chal, escaping his clan after taking an outsider as a mate, settled in Mithra, leading to the eventual formation of the Fireling race.[6]

The Dousan inhabited the Crystal Desert, located on the northwestern-most perimeter of the Endless Forest.[8] In the far north of the Desert lay the Wellspring, where the Dousan would restock their supplies, tend to their wounded, and retire once they reached old age.[9]

Accepting that our time here is short and death inevitable allows the Dousan to value the moment in which they are living, rather than becoming distracted and preoccupied with what could be or has been.

Dousan culture placed great importance on communing daily with both Thra and the Crystal, as well as acknowledging the passage of time and the inevitability of death.[11] This latter aspect,[1] together with their omission of the Skeksis from their prayers,[11] made members of this clan ineligible for service as Castle Guards,[1] with their relative isolation being the only reason why their heretical beliefs were tolerated. Furthermore, they considered Aughra to be just another mortal rather than a child of the Crystal or Thra's emissary.[11]

Because their belief system put more weight on connecting with Thra rather than with other Gelfling, the Dousan rarely associated with other clans, leading most non-Dousan Gelfling to distrust their desert-dwelling cousins, seeing their silence as aloofness and unfriendliness. Thriya, during her travels with the Dousan, dismissed such views as ignorant,[12] though some Dousan were indeed intensely xenophobic, to the point of considering mixed-clan relationships to be a capital offence.[6]

In contrast to other clans, which saw funerals as somber occasions, the Dousan saw such events as an opportunity for music and revelry, burying the deceased under the Wellspring Tree and burning their belongings in a pyre whilst singing of their favorite memories of their departed friend.[13]

The Dousan divided their daily work into so-called "body" and "spirit" tasks, the former consisting of water collection, food preparation and seeking shelter, while the latter were mostly dedicated to silent meditation, fire burning and incense making.[11] As water was scarce outside the Wellspring, the Dousan would set water traps to collect the moisture which descended during the night, pouring it into barrels at sunrise. While they traditionally abstained from consuming diurnal animals, they had no restrictions when it came to flowers, which grew in pocketed dunes and were prized for their nectar.[13] Dousan shamans were known to consume urdrupes in order to speak with Thra and glimpse into the future.[14]

The Dousan rarely congregated as a single unit, living instead in small groups called xerics, bands of 12-30 Gelfling lead by a sandmaster who traveled the desert on sand skiffs or Crystal Skimmers.[15]

As oral communication was considered a waste of moisture in their desert environment, the Dousan developed vojeye, an elaborate series of hand signals to communicate with each other.[16] As such, the Dousan rarely sang, with their few songs being told through both the spoken word and through vojeye.[9] In well-watered areas, such as the Wellspring or outside the Crystal Desert, the Dousan spoke freely.[16]

Day of the Dying Sun[]

To the Dousan, the Three Suns represented three incarnations of the same being, with each one symbolizing a phase in the cycle of life and death. The Day of the Dying Sun was the Dousan's most sacred holiday, linked as it was to the dimmest of the Three Suns. Once the Dying Sun was in sight, the Dousan removed their head coverings and engaged in an "empty Dreamfast" which lasted until the Sun sank into the horizon.[17]

The Daeydoim was the Dousan's sigil animal, and was believed to have sprung from the footprints left by Raunip in his wanderings. The so-called Trial of the Daeydoim, performed by childlings before leaving the Wellspring and by elders retiring from their xerics, was a three day expedition in which the participant would travel deep into the desert wearing nothing but a sheet of red cloth. What happened during those three days was a closely guarded secret not shared with outsiders. Survivors of the trial would be anointed by the milk of the Wellspring Tree. If the participant was a childling, they would be assigned to a xeric by the Maudra and the sandmaster council, while an elder preparing for retirement would have been given a hut known as the "Last Home" within the Wellspring, as well as a seat on the council.[18]

Dousan incense was renowned throughout Thra, and was used in such diverse places as the Citadel, Domrak and the Castle of the Crystal. The creation of incense was a task reserved for elders who had retired from their xerics, and the final product took the form of palm-sized chips which would produce a blue smoke when burned. Thriya described the aroma as "savory" and "heady".[4]

Although minimalists when it came to clothing, the Dousan adorned their bodies with elaborate tattoos which served the double function of blocking the rays of the Three Suns and carrying meaning. The tattoos were applied using the abrasive scales of Crystal Skimmers, the hollows of which would be filled with ink which entered the skin upon perforation. The most common ink colors, deep blue, green and gold, were obtained from plants indigenous to the Crystal Desert, while rarer colors, such as white or silver, had to be obtained elsewhere, with Thriya noting that such quests for new colors were the only example of materialism she had witnessed among the Dousan.[19] 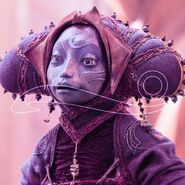 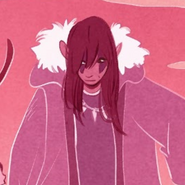 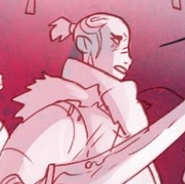