Edit
watch 02:56
Doctor Strange in The Multiverse o Madness - The Loop
Do you like this video?
Play Sound

Deethra, known as Deet for short, was a female Gelfling of the Grottan Clan who lived during the late Age of Division. Deet experienced a vision by touching Vliste-Staba, the Sanctuary Tree located in the Mountains of Grot, and joined the Gelfling resistance.

Living in Grot, Deet spent her time scavenging Glow Moss to feed her Nurlocs, however, one day, the moss turned out to be poisoned by an infectious contagion caused by the corruption of the Dark Crystal. Her Nurlocs became insane and attacked her, causing her to flee toward the Sanctuary Tree, which spoke to her. It explained the Darkening, that the great trees had been containing it in the earth for many trine, but that now it is seeping to the surface, and she must stop it. After being given medicine by Maudra Argot, Deet was sent to the surface to warn the All-Maudra of the danger.[2]

Passing through forests, Deet eventually befriended a fizzgig and went to sleep, only to be attacked by a Spitter Arathim. Although she tried to reason with it, it simply continued to attack until Hup managed to defeat it. They then decided to travel together to Ha'rar, Hup correcting her on directions as she had mistaken a moon for a star.[3]

Continuing on her journey, Deet became fascinated by the thriving life on the surface of Thra, and worried more that the darkening would destroy it all. Hup reassured her that when they arrived at Ha'rar they would "win", but Deet misinterpreted him as saying the Gelfling would all unite. Hup tried in vain to explain that the clan divisions were too great for the Gelfling to unite and cooperate effectively, but Deet insisted that they just needed to "adjust". They then entered the Stonewood Clan capital, Stone-in-the-Wood, but were not welcomed. Oblivious to the hatred of the locals, Deet sat at a bar and asked questions about the town, only for them to shove her off of the bar, much to her confusion. Seeing this, Hup attacked the locals despite Deet's attempts to stop the fight, and eventually Hup was imprisoned. Deet sets out to free him, but is denied an audience with Maudra Fara as a "dirty" Grottan. Watching Rian walk past her and gain admittance, Deet complained that he was much dirtier than her, to which the guard said at least Rian was a member of their clan. Deet met with Rian after he was cast out later, and took inspiration when he said he was treated like a "monster".[4]

Using a moss to make herself glow and appear like a monster, Deet frightened the guards away the next night and broke Hup out of prison when they fled. Leaving, Deet nearly walks into a patch of Gobbles, although Hup saved her from them. Later, while sheltering a storm, Deet saw skekMal rush past after Rian, and followed in order to help. She arrived near the end of the fight, comforting Rian after his father fell into the Gobbles with skekMal, until skekMal miraculously launched out of the Gobbles and snatched Rian away.[5]

Continuing on to Ha'rar, Deet had to stop when Hup broke down sobbing, attempting to dissuade Deet not to go to Ha'rar due to his fear for her. Hup confessed that he didn't think himself capable of protecting her, but Deet reassured Hup and they pressed on to finally arrive in Ha'rar. Once there, Deet began to worry that she would be denied entry to see the All-Maudra as she had been denied entry to see Maudra Fara, so Hup snatched a fancy outfit for her to masquerade as a Vapran and bluffed the guard into allowing them to enter. Although they nearly reached the All-Maudra, Deet was found out by Seladon, and ordered to give the message to her rather than to the All-Maudra. Although Seladon initially disbelieved Deet due to the lack of proof, Deet dreamfasted with her, only for them both to land in the Dream Space rather than a normal dreamfast, where Deet was surprised to see Rian and noted (along with Gurjin) that she arrived via dreamfasting. After Aughra explained that the Dream Space was "the source of magic and prophecy", ejected Seladon, and brought Deet before the Crystal of Truth, the Skeksis' crimes of draining Gelfling of essence was revealed to her by the Crystal. Aughra then ordered Deet to travel with Brea, Lore, and Rian to the Circle of the Suns. After issuing additional orders, Aughra returned Deet to her body, only for Deet to find herself surrounded by Seladon's paladins until Mayrin ordered them aside. Deet then accompanied Mayrin to confront skekVar and skekZok, only for skekVar to slay Mayrin and have Seladon imprison Deet, Brea, and Hup.[6]

Deet, Brea, and Hup were later escorted by paladins into a cage, despite Deet's protestations, attached to the Skeksis carriage. It then set off for the Castle of the Crystal, but was ambushed by Rian and his allies, with Lore freeing Deet, Brea and Hup and routing the Skeksis. Deet then hugged Rian for stopping the Skeksis long enough to free her, and while traveling into the Crystal Desert she reassured Brea that they would perform the burial ceremonies for Mayrin, singing a dirge together. Rek'yr then arrived, and she went with him to the Circle of the Suns.[7]

Arrival at the Circle of the Suns[]

Comforting an airsick Hup, Deet arrived at the base of the Circle of the Suns and was carried by Lore to its summit. There she met skekGra and urGoh, but being left to wait, she became unnerved by the strangeness of the Circle of the Suns and missed her caves. Noticing her homesickness, Rian comforted her until urGoh summoned them to see their theatrical performance, which unlike her compatriots, Deet actually enjoyed. After the pair finally explained that a Gelfling could use the Dual Glaive (which Deet puzzled out to be hidden in Grot) to defeat the Skeksis and unify the Skeksis and Mystics into the urSkeks, Deet assured the pair that they would see them made whole again. As she prepared to leave, skekMal arrived and attempted to attack her. Hup blocked the attack, but skekMal badly injured Hup, with Deet rushing to his aid.[8]

With Hup recovering under the care of skekGra and urGoh, Deet encouraged him to stay in bed while she and Rian set out to find the Dual Glaive. Using vast-moving air in the Breath of Thra, a series of volcanic vents, Deet flew Rian from the Circle of the Suns to Domrak Village. There, they discovered the village under attack by Arathim Silk Spitters and Threaders, and Deet rushed to her home to find it destroyed. She discovered her brother Bobb'N there, and tried to reach him, but his mind was controlled by the Ascendancy, and he called other Arathim to their location. Darkened Nurlocs intervened, attacking everyone indiscriminately, so Deet saved Bobb'N while Rian distracted a Nurloc before dragging Rian into a tunnel. There, Rian was possessed by a Threader, and Deet was nearly possessed as well, until Bobb'N arrived and freed them both. Coming before the Ascendancy, Rian and Deet brokered an alliance between Arathim and Gelfling, so the Arathim released the Grottan Clan and Deet embraced her parents. As everyone ascended to the surface together, the Sanctuary Tree came under attack. Deet pleading with the tree to help her defeat the Darkening, so it gifted her with its power. Using it, Deet, healed a Darkened Nurloc and then passed out, Rian carrying her to the surface.[9]

When Deet awoke, she wanted to return to the caves to search for the Dual Glaive, but Maudra Argot revealed that she had half of it hidden within her walking stick and presented it to Rian. After explaining that the other half was in Stone-in-the-Wood, Argot summoned a landstrider for Deet and Rian to ride there, and they reformed the Dual Glaive.[10]

Deet set about making bombs for the upcoming battle, but when an errant explosion went off, Rian came to talk with her and make sure she was well. Rian tried to comfort Deet and hold her hand, but the Darkening Deet had absorbed from the Nurloc remained in Deet's hands, leaving them pained, and so Deet pulled away and left Rian confused. Eventually Brea arrived with the remnant Gelfling from the Castle of the Crystal's prisons, and they prepared for battle. Deet took to the air with the other Gelfling women to drop bombs from above, attacking an obvious skekAyuk from behind, who could not drive Deet away.

Eventually the other Gelfling Clans arrived and put the Skeksis in a tenuous position, making skekSo desperate enough to unleash the Darkening upon the Gelfling in a wave of electrical destruction. Using her power from the Sanctuary Tree, Deet absorbed the entire wave of energy and redirected enough of it back at the Skeksis that skekLach was completely obliterated. Darkened by the power she had absorbed, Deet fled from her companions into the Endless Forest, and although Rian followed after her, Deet used the Darkening to wall him away, and vanished into the woods.[11]

Deet was diminutive by Gelfling standards, and a skilled flyer, having been able from an early age to navigate the narrow caverns of Grot.[1]

She was an optimist at heart, who rarely lost hope in the face of adversity. Her connection to nature, especially animals, was stronger than that of her friends. Nevertheless, her eagerness to help others, even when such actions were beyond her capacity, could be overwhelming.[1] Despite her gentle nature, Deet would do anything to protect her friends and family when the Skeksis threatened her clan, even resorting to lethal force when sufficiently provoked.[11]

Like other Grottans, she had poor hygiene and questioned the utility of washing her hands.[6] Having lived all her life in the caves of Grot, she was largely ignorant of the outside world, being unaware of the danger posed by the Arathim,[3] the xenophobia of other Gelfling clans[4] and the intoxicating effects of Urdrupes.[4]

Deet was largely based on the character of Thurma, a character from the scrapped Power of the Dark Crystal movie: both were conceived as large-eyed heroines dwelling in an underground realm who venture to the surface world in order to save their respective people. According to Jeffrey Addiss, Deet was meant to act as the audience's "eyes and ears" into Thra's natural world,[12] while Halle Stanford described her as "the ultimate environmental activist".[13]

The Deet puppet's eyes were so large, that there was no space in the head to incorporate servo-triggered eyelids, so the act of blinking had to be added digitally. Beccy Henderson incorporated green aventurine, a quartz popularly known as the "stone of opportunity", to Deet's clothing, in order to emphasize Deet's "confidence to change while reinforcing leadership qualities".[13] 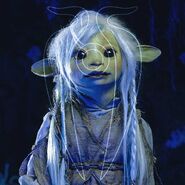 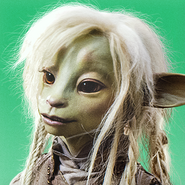 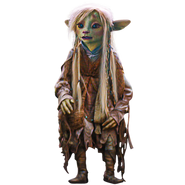