Princess of the Vapra Clan

The most beautiful desert flowers are always the most dangerous.

Brea was a Gelfling princess of the Vapra Clan and the youngest daughter of All-Maudra Mayrin.

The third daughter of Mayrin and an unidentified father, possibly Kam'lu. When skekLach the Collector and skekOk the Scroll-Keeper arrived in Ha'rar for the tithing ceremony, Brea's older sister Tavra managed to get her included in the ceremony, much to her delight, asking only that Brea not embarrass her or ask the Skeksis questions. Heedless, Brea sought them out anyway, and ended up sprawling in front of their carriage as she pushed through a crowd. SkekOk however was surprisingly merciful, and insisted on her accompanying him in his carriage, where he shared his passion for books with her. Brea later hugged skekOk for interceding with her mother, the All-Maudra Mayrin, but began to question the Skeksis when they manipulated poor farmers into giving up precious heirlooms. When she examined the legal texts of tithing and found it immoral, her Librarian tried to take away her books, so she fought until some magical light began to stream from the book. Although she tried to tell her mother what happened, she became disgusted to see that she wore the farmer's amulet, as the Skeksis gave it to her after taking it, and stubbornly argued with her mother that they should even give all of their wealth and privileges to others.[3]

Brea sought more answers, using the Librarian's reluctantly-given advice to seek out the Sifa for knowledge about the symbol she saw. However, Elder Cadia attempted to give her powdered nulroot, something Brea knew to induce amnesia. Dropping her money as a distraction, Brea swapped the drinks so that Cadia would drink it. Eventually he became enraged when she revealed this, until Onica knocked him out with a bowl and offered to help Brea if she would get Mayrin's brightest jewel for her. However, Mayrin ordered Brea sent to the Order of Lesser Service in payment for her crime against the Sifans, on Seladon's suggestion.[4]

Consigned to the service, Brea was made to wear a clown's hat and to wash filthy Podlings who resisted all the while, her indenture intended to be an entire trine in length. Although Duadran ordered her to run after a fleeing Podling, she decided to flee the service due to the urgency, tossing her hat away. Although she was caught by her sister Tavra, Tavra let her go, reassuring her and saying that the "bonds of sisterhood" could not be broken. Brea continued to Ha'rar, through the library, and flew from the top of it to the palace so that she could recover the "brightest jewel" in her mother Mayrin's chambers, hanging from the ceiling. Brea then went to meet Onica, thinking the jewel to be payment, but Onica chastised her and sung to the jewel; it is in fact a chrysalis, a container for an imperial unamoth, which began to move. Brea spoke her desire to know the truth to the moth, which then emerged from the chrysalis and flew toward the Ha'rar throne room. Brea flew behind it, and when they arrived in the throne room, the moth activated a hidden passage through the throne itself into a hidden chamber.[5]

Entering the hidden chamber, Brea discovered a circular room with seven symbols, one for each clan. Given that the inscription above the entrance said "Thra's true balance will be found when natural order is sound", Brea assumed that she must activate each symbol in order according to each clan's social rank. Although initially seeming to succeed, with sound beginning to reverberate with each successful clan chosen, the sound vanished when Brea selected Sifa as the third clan. Brea eventually realizes that the entire puzzle is a farce, that the engineers wanted all clans to be treated as if they were equal, which successfully solved the puzzle and resulted in Lore being constructed out of rocks in the center of the room. Lore explained that it would protect Brea and guide her to the Circle of the Suns, but they were interrupted by the arrival of Seladon, who only heard it speaking heresy about overthrowing the Skeksis.[6]

Berated by Seladon over wiping Elder Cadia's memory, deserting the Order of Lesser Service, and conspiring to overthrow the Skeksis, Brea accused Seladon of only caring for the throne of All-Maudra before the pair were interrupted by the arrival of Mayrin. Although Mayrin accused Brea of insulting her and tradition, Brea asserted that she values truth and knowledge, convincing her mother to at least see the hidden chamber and listen to Lore. Upon entering, Brea introduced Mayrin to Lore, and Mayrin then dreamfasted with Brea to learn how Brea found the chamber. Rather than dreamfast normally however, Brea suddenly found herself in the Dream Space, shocked to see the Crystal cracked. Aughra hushed Brea, introduced the rest of the Gelfling present, banished Seladon after her outburst and then finally brought Brea before the Crystal where the Skeksis' crimes against the Gelfling were revealed to her. Afterward, Aughra ordered Brea to travel with Deet, Rian, and Lore to the Circle of the Suns and, after issuing further orders, Aughra returned Brea to her body. Brea then followed Mayrin to confront skekVar and skekZok, picking up Deet and Hup along the way, and then watched skekVar slice Mayrin's stomach open with a saber just as she gained her courage. Devastated and standing over Mayrin as she bled to death, Brea became even more distraught when Seladon blamed Brea for Mayrin's demise, sobbing into her corpse and pleading with Seladon to reconsider. Unmoved, Seladon ordered Brea to be imprisoned, and then to be transferred to the Castle of the Crystal with skekVar and skekZok.[7]

Brea was then escorted by paladins to the Skeksis carriage, and although she accused skekVar of murder and openly defied him, she was nonetheless placed in a cage attached to the carriage, which set off toward the Castle. En route, the carriage was ambushed by Rian, and Lore freed Brea from the cage and frightened the Skeksis away. Happy to be free, Brea hugged Rian and sent the other paladins away to spread word, but soon broke down with remorse for her mother Mayrin, distraught that she could not perform ceremonies for her. Deet reassured her that they would perform the ceremonies in the Crystal Desert, the group singing a dirge in Old Gelfling for her, which Brea greatly appreciated. When Rek'yr arrived offering help, Brea quickly accepted, asking him to take them to the Circle of the Suns (albeit with coaxing), ignoring Rian's protestations about Rek'yr being Dousan.[8]

Arrival at the Circle of the Suns[edit | edit source]

After being dropped off by Rek'yr, he once again attempted to dissuade Brea from going to the Circle of the Suns before departing. Brea continued on despite his warnings, and when Lore attempted to carry her to the summit of the Circle when a sandstorm threatened them, Brea insisted that Lore carry everyone. At the summit, Brea was introduced to skekGra and urGoh, and she hugged Lore before skekGra deactivated him. Frustrated at skekGra and urGoh taking so long to get to the point during their performance, Brea was roused out of sleepiness when skekGra finally explained how the urSkeks arrived on Thra, took the Crystal from Aughra in exchange for an orrery, misused it to the point of dividing themselves into Mystics and Skeksis, shattered a single shard from the Crystal in their confusion, and that the Dual Glaive could be used by a Gelfling to unite the seven clans, defeat the Skeksis, and unify the two races into the urSkeks once more. Unfortunately however, skekMal arrived and attacked the party, Brea rushing to reactivate Lore so that he could defend them. Just as Lore began to assemble himself, skekMal arrived in retreat from the Archer's arrows. He snatched Brea up and knocked the activation device away from Lore, who was reduced to simple rubble again, and escaped with Brea on Bennu. Brea only managed to scream for Rian to "find the glaive!" and to drop her journal for Rian to recover.[2]

Brea was brought by skekMal to the Castle of the Crystal in a cage, and then subsequently moved by skekOk into a prison cell while they ministered to skekMal's wounds. Seladon, in another cell, blamed Brea for their situation until Tavra arrived, and the Ascendancy spoke through her, saying the age of the Gelfling had come to an end.[9]

Pleading with Tavra to stop, Brea was bound and gagged by Tavra to be drained for skekMal's healing. Brea was only spared when Aughra bargained her own essence for the Gelfling's release. Tavra then departed to hunt skekVar after wounding him, and Brea caught up with Tavra, Brea found her gravely wounded. Brea and Seladon carried Tavra away, and tending to Tavra when she succumbed to her wounds. As Tavra lay dying, Seladon apologized for all her wrongdoings, and their relationship mended even as Tavra died, both sisters mourning together. Afterward, Brea heard Rian's message from the unnatural fires caused by the Dual Glaive's reformation.[10]

Brea arrived in Stone-in-the-Wood with the rest of the company, and after receiving her journal back from Rian, participated in the battle beside her sister "for mother". Brea took to the air and dropped bombs all around the Skeksis, eventually landing and briefly dueling with skekOk until skekMal arrived and took Rian. Brea tried to intimidate skekMal into stopping, but to no avail until skekMal's urRu half, urVa the Archer, killed himself and skekMal with him. The other Gelfling Clans then arrived, and Deet slew skekLach, routing the Skeksis and resulting in a Gelfling victory that Brea celebrated. Eventually, Brea noticed the Shard of the Division amidst the shattered ruins of the Dual Glaive, and realized that it was the true key to ending the Skeksis' power, not the weapon.[11]

As the youngest daughter of the All-Maudra, Brea was not expected to inherit her mother's crown, and was thus not entrusted with any major function in the Citadel other than appearing at ceremonies. This lack of responsibilities allowed Brea to indulge her insatiable curiosity, spending most of her free time in the Vapran library.

Enamored with books, Brea had by the eve of the Gelfling resistance become something of a polymath, having self-educated herself in numerous fields such as botany, medicine and history. She had a particular interest in knowing the origins of the status quo, so much so that the Librarian compared her to a Sifan.[12] However, her knowledge was stifled by the censorship imposed by the Skeksis, knowing nothing of the Great Division and believing the urRu to be a myth.[2]

Much to the frustration of her mother and eldest sister, Brea had little regard for ceremony or hierarchy, habitually disobeying or forgetting instructions if they got in the way of her quest for knowledge. Her innate sense of social justice also put her at odds with the Skeksis early on, seeing the obligatory tithing ceremonies as an attempt to keep her people divided and impoverished. This sense of integrity was such that she was willing to sacrifice her rank and books if it meant creating a more equitable society.[3] 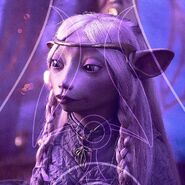 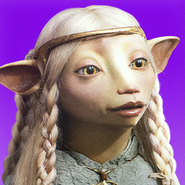 Add a photo to this gallery

Retrieved from "https://darkcrystal.fandom.com/wiki/Brea?oldid=25394"
Community content is available under CC-BY-SA unless otherwise noted.